Road Rage Causes Accidents, But Is It Really Cause for a Lawsuit? 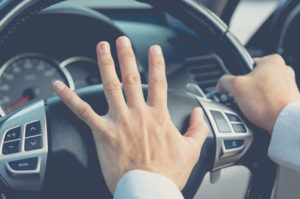 This past September, a Seminole County jury found Florida resident, Matthew Appearson, guilty of attempted second-degree murder with a firearm. Appearson reportedly shot at George Zimmerman—the former neighborhood watch volunteer acquitted for the murder of Trayvon Martin back in 2012—after getting into a heated argument regarding the Martin case while driving side-by-side on Lake Mary Boulevard. Appearson tried to claim self-defense, but the jury found that his behavior did not meet the standards of self-defense.

While Zimmerman’s case against Appearson is going to be vastly different than other cases of road rage brought before the courts, and therefore, will not likely result in criminal charges, a civil claim may be filed against an individual if their reckless and careless actions result in the injury of another individual.

Road rage accounts for a surprising number of accidents and traffic fatalities. In fact, according the National Highway Traffic Safety Administration (NHTSA), 94 percent of all traffic accidents are caused by driver error; of those, 33 percent can be directly linked to actions typical of road rage, such as improper maneuvering and misjudging the space between vehicles.

Additionally, according to SafeMotorist.com, 66 percent of traffic deaths can be linked to road rage; 37 percent of those fatalities were caused by a firearm, and not a common car accident.

Road rage is a very serious problem, and the victims of road rage should have every right to sue an offender in the event that their anger causes unnecessary pain, suffering, and loss. Fortunately, many courts recognize road rage as an act of negligence, and therefore, allow victims to file a civil suit against the perpetrator.

In Florida, the authorities distinguish between “driver error” and “aggressive driving.” There are many behaviors—such as following too closely, speeding, and cutting other drivers off—that are considered aggressive and unreasonable, and as such, are a breach of a driver’s civil duty to other drivers on the road. Then there are other behaviors—such as wielding a gun at another driver or trying to run another driver off the road (which two percent of drivers have admitted to doing)—that are obvious violations of the law. Florida Statute 316.0895 and 316.1923 deal expressly with aggressive driving behaviors and the consequences of each.

When Is a Civil Claim Appropriate for After an Incident of Road Rage?

In order to file a civil claim for injuries caused by road rage under Florida law, you must be able to prove that the following three elements are true:

The last element is essential in order to prevail in a civil claim for road rage. For instance, a driver can drive next to you and yell at you, honk at you, and cut you off all they like, but if their behavior does not result in any injuries, you do not have a claim. However, if that driver were to veer into you and run you off the road, thereby causing your vehicle to flip, you then have damages to claim, such as the damage to your vehicle, medical bills for your injuries, and any other emotional duress you may feel.

At The Pendas Law Firm, our Orlando car accident lawyers can help you evaluate the circumstances surrounding your accident and determine whether or not road rage played a role in the incident. If we believe that the other driver acted in a reckless or negligent manner, we will aggressively fight on your behalf to ensure that they are adequately punished, and that you are adequately compensated. To schedule a private consultation with an Orlando car accident lawyer today, contact our firm at 1-888-LPENDAS.