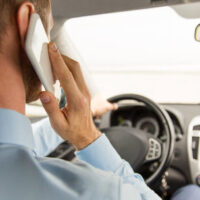 These days, there is no question that cell phones are an important part of our everyday lives. After all, for most people, cameras, alarm clocks, and even computers have been replaced by the portable devices that we carry around and use to communicate in both our personal and professional lives. For this reason, it is unsurprising that cell use crosses over into spaces where it arguably shouldn’t.

Recently, the News-Press reported that a new bill has been proposed that would tighten regulations on cell phone use while driving in Florida. The bill, which will be considered at the 2019 legislative session, would allow law enforcement officers to pull over motorists for texting or talking on hand-held cell phones while driving.

The reasoning behind this bill is clearly rooted in safety concerns. According to USA Today, cell phone use causes more than a quarter of the car accidents that occur in this country.

Why Does Using a Cell Phone While Driving Carry So Much Potential Risk?


The simple explanation is that both driving and using a cell phone, unfortunately, require the same kind of attention despite being two very different types of behavior. Both driving and operating a cell phone require the user’s visual attention. While the majority of cell phones these days are manufactured with some kind of voice assistant intended to help the user be handsfree, many times these voice assistants do not work sufficiently and many people don’t use them anyway. Further, popular applications such as Instagram and Snapchat, by their nature, consist primarily of pictures and videos and are therefore inherently visual. And the problem with this is that your eyes can only be looking in one direction at a time, and if you’re using your phone while driving, there’s a good chance your eyes won’t be on the road.

What is the Current Law Concerning Cell Phone Use and Driving in Florida?

Under Florida law, texting and driving is generally illegal. However, the ban also contains several exceptions when it does not apply, such as when the car is stationary.

How Would the Proposed Bill Change the Current Law?

The biggest change that bill HB-107 proposes is to make the non-handsfree use of a cell phone a primary offense. The current Florida statute, while banning texting and driving, is a secondary offense, meaning that a motorist can only be cited under it if the motorist is pulled over for another driving infraction. Under HB-107, motorists could be pulled over based exclusively on cell phone use while driving.

If you or a loved one has been the victim of a car accident as the result of the other driver’s cell phone use, we can help. Contact the experienced Fort Myers personal injury attorneys of The Pendas Law Firm today and we will help you recover the compensation you are entitled to.