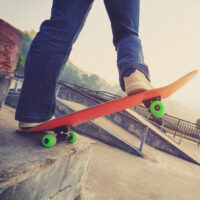 Florida Congressman Richard Stark of District 104 has proposed a new bill that would make it illegal for anyone under the age of 16 to ride a skateboard or a scooter without a helmet. While teenagers across the state bemoan the proposed law, it is something that should have been enacted a long time ago. According to Skatepark.org, there were 26 skateboarding fatalities in 2015 alone. That number does not include the number of head injuries sustained from the sport. While the law is meant to reduce that number, it fails in one aspect: the age limit. According to the same source, the average age of those killed in a skateboarding accident was 20.

Whether or not the bill passes, the Miami personal injury lawyers at The Pendas Law Firm encourage all skateboarders to wear a helmet. Even if you have never been injured before, the risks are aplenty.

The most common risks associated with skateboarding include:

If your son or daughter enjoys skateboarding, warn them of these very real risks, and encourage them to wear a helmet at all times. Though a helmet may be “uncool,” a few laughs from peers is far better than a life-changing or even life-taking head injury.

If your son or daughter sustained a serious head injury while out skateboarding, and if you believe that another rider or vehicle operator was responsible, reach out to the personal injury lawyers at The Pendas Law Firm in Miami right away. Your son or daughter may be eligible for compensation via a personal injury claim. To consult with one of our legal representatives today, call 888-LPENDAS now.