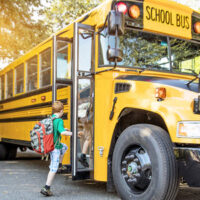 All Florida motorists are responsible for driving safely around school buses, especially when they are transporting, loading or unloading children. Florida has specific laws that drivers must follow when approaching buses:

Motorists should also obey lower speed limits in school zones, obey signals from school crossing guards and be alert when children are walking or riding their bikes.

A Gainesville school bus was recently struck by a hit-and-run driver while stopped in traffic, according to the Florida Highway Patrol. A white pickup truck crashed into the back of the bus, exited his vehicle to assess the damage, and then fled the scene. Two students and the bus driver sustained minor injuries.

In May 2017, one student was injured in a crash involving an SUV and a Broward County school bus. The student and two adults in the SUV were taken to the hospital with minor injuries. There were 13 total students on the bus when the accident happened.

In April 2017, a suspected drunk driver struck five middle school students after they got off their school bus in Poinciana. One of the young teens died at the hospital, and another sustained serious injuries. The other three students were treated at the scene of the accident and released. The 48-year-old driver, whose blood alcohol level was still twice the legal limit several hours after the crash, left the scene before crashing into a stopped car.

Also in April, a 15-year-old high school student was hit by a car while crossing the street to his bus stop in Eustis. He sustained a serious head injury and was airlifted to the hospital. It was unclear at the time how fast the small sedan that struck the teen was driving.

Contact a Fort Lauderdale personal injury attorney at The Pendas Law Firm today for a free consultation if your child has been injured in a school bus accident, while waiting to catch the bus, or after exiting the bus at the end of the school day. We will help you recover compensation for your child’s injuries.