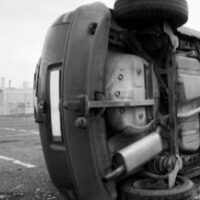 The South Florida Sun Sentinel recently reported on two separate rollover crashes involving young drivers that have had tragic consequences. According to the Broward Sheriff’s Office, a 16-year-old is dead after an evening rollover crash near Fort Lauderdale. The 17-year-old driver of the black Lexus the deceased teen was riding in was reportedly speeding when the vehicle collided with a utility pole and rolled over.

In the second tragedy, state troopers reported that a 19-year-old Clearwater man died in an early morning crash after the Mitsubishi Lancer he was a passenger in veered off Interstate 95 in Boynton Beach and rolled over several times. The vehicle reportedly became airborne before rolling over several times and hitting a palm tree. The 21-year-old driver of the vehicle and the other passenger have both been hospitalized with serious injuries.

How Often do Rollover Accidents Happen?


While the prospect of a rollover accident is inarguably an unpleasant scenario to imagine, the good news is that statistics published by the National Highway Traffic Safety Administration (NHTSA) indicate that only two percent of the nearly 9.1 million passenger car, SUV, pickup and van crashes in 2010 involved a rollover. However, statistics also indicate that rollover accidents have a higher fatality rate than other kinds of crashes when they do occur. That same year, almost 35 percent of the deaths that resulted from passenger vehicle crashes involved rollovers. This equated to more than 7,600 fatalities.

Additionally, car accidents are the number one cause of death for teens in the United States, and rollover accidents are obviously one of the factors contributing to this troubling statistic.

How do Young Drivers End Up in Rollover Accidents?

Reckless risks. Young drivers statistically have among the lowest rates of seat belt use when compared with other age groups. Similarly, young drivers are more likely than older drivers to speed and allow less room between their vehicle and other vehicles.

Inexperience. Young drivers have obviously not had as much time on the road as their older counterparts. They are also more likely than older drivers to underestimate dangerous situations or not be able to recognize hazards that can cause a rollover.

Distracted Driving. Driving is obviously an activity that requires focus due to ever-changing road conditions. However, young drivers are often attempting to multitask while driving, whether they are talking to passengers or using social media. Unfortunately, this can create significant room for error that causes a rollover accident.

Have You or a Loved One Been Injured in a Rollover Accident as the Result of the Negligence of a Young Driver?

We understand how serious the tragic consequences of a rollover accident can be and we sympathize with what you and your loved ones have experienced. Contact the experienced West Palm Beach car accident attorneys of The Pendas Law Firm today and we will help you recover the compensation you are entitled to.