Most Dangerous Interstate in U.S. Is in Florida 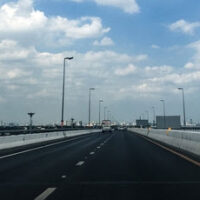 As Hurricane Irma barreled toward Florida last month, hundreds of thousands of residents and tourists (maybe even millions) evacuated their homes and vacation rentals. In fact, the government mandated evacuations in certain areas, including in Tampa Bay.

The mass exodus clogged roadways and exacerbated gas shortages — conditions ripe not only for traffic gridlock but also for car accidents. The extra traffic doesn’t help the already treacherous conditions on Interstate 4, which last year was named the most dangerous highway in the country.

The 132-mile interstate that runs from Tampa to Daytona Beach has been among the top 10 most dangerous highways since 2010. But last year a study concluded that Interstate 4 is in fact the most dangerous out of more than 70 interstates in the country.

The study was conducted by EverQuote, an online marketplace for car insurance, using data compiled by the National Highway Traffic Safety Administration. EverQuote found that Interstate 4, which connects Interstate 275 in Tampa and Interstate 95 in Daytona Beach, experienced 1.41 fatalities per miles between 2010 and 2015.

Here are a few recent examples of accidents on Interstate 4. These do not include any crashes that have occurred during the hurricane evacuation. On September 3, 2017, a motorcyclist crashed into another vehicle on Interstate 4, which left the cyclist in critical condition. The 39-year-old cyclist was speeding and weaving in and out of traffic when he changed lanes into the back of a Nissan Altima. Thankfully he was wearing a helmet.

In August 2017, a 17-year-old boy driving east on Interstate 4 swerved off the road and crashed into a tree in Lake Mary, Florida. His car burst into flames. A Seminole County police officer pulled the teen out of the vehicle, but he was pronounced dead at the scene. He was, however, wearing a seatbelt.

In July 2017, a series of crashes involving 12 vehicles temporarily shut down Interstate 4 westbound in Seminole County. At least three people were injured and taken to the hospital.

In June 2017, two men were killed when the driver lost control of the vehicle and drove off Interstate 4 in Orange County. They struck several trees, and both the driver and passenger died at the scene of the accident.

Hurricane Irma is enough to worry about with also having to worry about car accidents and personal injury lawsuits. Contact a car injury attorneys at The Pendas Law Firm today for a free consultation if you have been injured while fleeing the storm. We will help you recover compensation for your injuries.