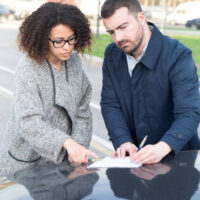 According to the Insurance Research Council, about 12.6 percent of motorists in the United States lack automobile insurance coverage. This means that you have a one in eight chance of getting into an accident where a negligent driver is not adequately insured.

When this happens, you are exposed to suffering serious injuries and being stuck holding the bag for all of your harms and losses. Fortunately, there is a way to mitigate this risk by carrying sufficient uninsured and underinsured motorist coverage through your own auto insurance policy.

These two types of insurance coverages are unique because your own auto insurance company effective steps into the shoes of the negligent driver. This means a claims adjuster from your auto insurance company will be assigned to the case and they will treat your claim just as if it was filed by a third party. This can be surprising to some drivers since they have paid premiums for years and yet their own insurance company is putting up a fight offering a fair and reasonable settlement of your claim.

Initially, uninsured motorist coverage was made to cover only bodily injury. However, some states have extended it to cover property damage. When dealing with property damage, the limit is usually low. The property damage doesn’t extend to vehicles with collision insurance.

Who Is Covered by UM/UIM Policies

Exclusion of Workers from UM/UIM coverage

However, UM/UIM coverage covers injuries that aren’t compensated under a workers’ compensation claim. An example is damages for pain and suffering.

As you can see, insurance coverage after a serious accident can get complicated very quickly, especially when the negligent driver who hit you lacks sufficient coverage. This is where the car accident lawyers at the Pendas Law Firm can be of tremendous assistance to you and your family. Contact our office today for a free case review. The firm represents clients in the Fort Lauderdale, Tampa, Orlando, Fort Myers, Jacksonville, West Palm Beach, Daytona Beach and Bradenton areas.