Were You Injured at an Amusement Park? 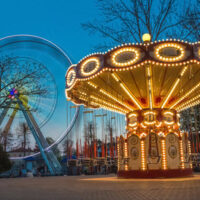 Some of the world’s most beloved characters “live” in Orlando. In fact, people come from all over the world to meet Mickey Mouse, Cinderella and numerous others at Walt Disney World, where they spend hundreds (and sometimes thousands) of dollars on rides, food, lodging and souvenirs. Orlando is also home to Universal Orlando, SeaWorld and several other amusement parks.

In 2015, a 10-year-old boy went on a field trip to Universal Orlando and injured his leg getting on the Incredible Hulk Coaster. (The Hulk roller coaster is one of the Island of Adventure’s original rides.) His family filed a lawsuit against the amusement park. In April 2017, a judge approved a $17,500 settlement agreement that releases the park from liability.

According to the lawsuit, the boy’s injury was “permanent within a reasonable degree of medical certainty,” and he was treated at Orlando Regional Medical Center. However, his injury didn’t require an overnight hospital stay (at least initially). Florida requires large theme parks like Universal and Disney to provide written, quarterly reports of serious injuries and illnesses that require hospitalization for more than 24 hours, and the boy’s injury was not included in those reports.

Note that Florida law permits large entertainment venues like Universal and Disney to use their own safety inspectors. Specifically, permanent facilities with 1,000 or more employees are exempt from state inspections if they employ their own full-time inspectors. The special treatment afforded to large amusement parks and the money at their disposal can make it difficult to file an effective personal injury lawsuit against them, which is why you should always consult with an experienced attorney if you are injured on a ride or somewhere else within a theme park.

Who could forget the day that a 2-year-old boy was killed by an alligator at a Walt Disney World resort? It was an unthinkable tragedy — the boy was playing by the artificial lake at Disney’s Grand Floridian Resort and Spa with his family. He was collecting wet sand for the sandcastle he was building when the alligator grabbed his head. His father tried to free his son, but the gator dragged him underwater. It took 16 hours before the boy’s body was found. A medical examiner determined that he suffered a traumatic neck injury and drowned.

Florida is home to 1.3 million alligators, some of which live in artificial lakes like the one at this Walt Disney resort. While gator attacks aren’t common, the resort did not have any warnings posted in the area where the boy was attacked. Such failure to warn is certainly grounds for a personal injury lawsuit — or, in this tragic case, a wrongful death action.

If you were injured at an amusement park, contact an Orlando personal injury attorney at The Pendas Law Firm today for a free consultation. We can help ensure you that receive the compensation you deserve.