The Dangers of Dump Trucks 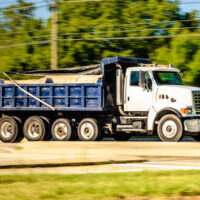 Dump trucks are typically used to carry loose construction material (like sand, gravel and waste) from one location to another. But while they play a critical role in the construction industry, dump trucks pose unique dangers to other drivers on the road. For example, dump trucks are heavy vehicles that are difficult to maneuver and have trouble coming to a sudden stop. So if a car changes lanes directly in front of a dump truck, or if the truck driver takes his eyes off the road and notices stopped traffic or another road obstruction at the last second, it’s likely he won’t be able to avoid an accident.

Dump truck drivers also have an incentive to get to their destinations quickly (which could mean speeding or violating other traffic laws) because they are usually paid by the load, not by the hour. Many drivers operate their vehicles safely, but not all. In fact, Florida authorities have blamed dump trucks for several recent automobile accidents:

Florida operates under a comparative negligence standard, which means that you can only recover damages to the extent that you didn’t contribute to the accident. In the case of an accident involving a dump truck, if a jury determines that the truck driver was 75 percent at fault and the other driver 25 percent at fault, the other driver may recover 75 percent of his damages (such as medical bills and lost earnings).

If you or a loved one was injured (or killed) in a car accident involving a dump truck, contact a Fort Myers personal injury attorney at The Pendas Law Firm today for a free consultation. We can help ensure you that receive the compensation you deserve.