Imagine that your neighbor’s house catches on fire because she left the oven on, and the fire spreads to your house and injures your child. Or that you visit a restaurant and slip on a giant puddle of water. Or that your neighbor invites you over for dinner but when you walk up the… Read More » 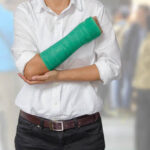 Negligence is a central component of personal injury law. Typically, the injured plaintiff must prove that the defendant’s failure to use reasonable care caused those injuries. Proving negligence can be difficult. But in some cases, the law creates a legal shortcut, making it easier for injured plaintiffs to recover compensation. That “shortcut” is called… Read More »

In May of 2014, South Carolina resident Carla Denise Garrison was stabbed by a hypodermic needle in a Target parking lot. According to her testimony, upon getting out of the vehicle her then eight-year-old daughter Kaileigh picked up the used needle. Her mother swatted it out of her hand, and in doing so, pricked… Read More »

A woman claiming to be a victim of sexual assault at the hands of Bill Cosby recently filed a sexual battery lawsuit against actor Bill Cosby with the aid of her West Palm Beach lawyers. The suit, filed in California, also names Playboy founder Hugh Hefner as a co-conspirator in the suit, claiming he… Read More »