So You’ve Been Involved in an Accident and the Other Driver Doesn’t Want to Go Through Insurance? 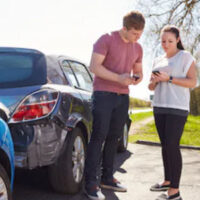 In some cases, the other driver will immediately admit to fault at the scene of the accident which may initially give you a sense of relief as you realize you won’t be fighting a battle to prove liability. But then, the follow up statement comes: “Because of *blank*, we don’t need to get the authorities involved – can we just settle this between us without going through insurance?”

The excuse that fills in the blank doesn’t matter. But the actions that you undertake next do.

Why Would the Other Driver Not Want to Submit an Insurance Claim?

Initially, it is important to understand that anyone who doesn’t want to document the accident with authorities or go the insurance route has some strong motivation for feeling this way and asking you, a perfect stranger, to go along with this plan. In some cases, a driver may simply be trying to avoid a higher premium. However, in many cases there’s a better reason – the other driver doesn’t actually have insurance. According to one report published by the Insurance Research Council, roughly one in eight drivers on the road in 2015 was uninsured.

As many of us know from having let people borrow money in situations involving things far less serious than damage to a vehicle or ourselves, just because a person promises to pay you doesn’t mean they actually will. In addition, regardless of whether the other person has insurance or not, it’s always a good idea to call the police following an accident. And it is typically to your benefit to obtain compensation through the insurance company.

Does that Mean I Need to Interact Directly With the Other Driver’s Insurance Company?

Can I Hold the Other Driver Liable if They in Fact Don’t Have Insurance?

In this circumstance, you have the option to pursue a personal injury claim, but whether doing so is worth it varies substantially from case to case. In some cases, the other driver doesn’t have insurance due to financial constraints which also means there is a good chance that he or she doesn’t have a lot of assets. In that circumstance, even the best legal team may not be able to help you recover an amount of damages that would make pursuing a claim against the other driver be worth it. However, so long as you have insurance yourself, an experienced personal injury attorney may still be able to help you obtain compensation under Florida law.


If you were hurt in an accident that was someone else’s fault, you may be entitled to compensation for a number of different damages. However, it can be difficult to obtain the compensation you deserve so it is important to reach out to an experienced personal injury attorney as soon as possible. Contact the West Palm Beach personal injury attorneys of the Pendas Law Firm to begin maximizing your rights today.