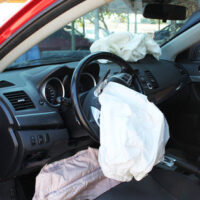 Driving can be dangerous enough without adding defective automobile parts into the mix, but that’s exactly what’s at issue in a class action lawsuit filed in federal court in Miami against four automakers. Toyota, Subaru, BMW and Mazda recently agreed to pay $553 million to 15.8 million current and former car owners (and lessees) that were affected by an airbag recall. Three other automakers involved in the class action are not parties to the proposed settlement: Honda, Ford and Nissan.

(The court will decide whether or not to approve the proposed settlement agreement.)

The recall involved defective airbags supplied by Takata Corporation, an automotive parts company based in Japan that provides automobile safety components to automakers like Toyota, Subaru, BMW and Mazda.

The problems with the airbags stemmed from the use of ammonium nitrate as an inflator. When that chemical compound is continuously exposed to air or moisture it can become unstable and inflate the airbag more powerfully, causing it to rupture and emit dangerous chemicals into the vehicle. In fact, according to the New York Times, the Takata airbags are linked to at least 11 deaths and more than 180 injuries.

While millions of the recalls have been completed, there are still cars with defective Takata airbags on the roads. Because owners might not know that their cars are impacted, the National Highway Traffic Safety Administration has a link on SaferCar.gov to help them determine whether their cars are part of the Takata recall. All you need is your Vehicle Identification Number (VIN).

Lawsuits and the Settlement Agreement

There have been multiple lawsuits filed against Takata and automakers that incorporate Takata’s products. This one, if approved by the court, will result in a partial settlement agreement (as three automakers are not parties to the agreement).

The settlement funds will cover charges incurred by owners while their cars are being repaired. For example, if you have to take time off work then you are entitled to lost wages. If you need a rental car while your vehicle is in the repair shop then those expenses can be reimbursed. Other compensable costs might include child care and the expense of towing your defective vehicle.

However, the settlement does not cover personal injury expenses (like medical bills) or property damage. Those issues will be needed to be handled separately. In fact, personal injury lawsuits have already been filed against Takata. The automotive parts supplier has also reached a $1 billion settlement with the federal government, including a $25 million criminal fine.