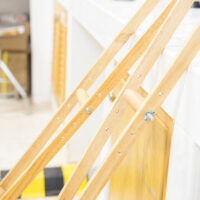 While illegal aliens do not enjoy the same protections as legal citizens, they are entitled to file a personal injury claim in Florida if injured by someone else’s negligent conduct.

But illegal immigrants might be too scared to even walk into a courtroom right now. Arrests of undocumented immigrants in Florida, Puerto Rico and the U.S. Virgin Islands have almost doubled since 2016, according to the U.S. Immigration and Customs Enforcement office in Miami. Specifically, the office reported arresting 6,192 people this year, which is up from last year’s 3,524.

Deportations are also on the rise. The Miami office reported a 20 percent increase since 2016, from 5,600 removals to 7,100. A January executive order issued by President Trump directing federal agencies to enforce immigration laws is the impetus behind these increased numbers.

Previously the Obama administration had directed ICE to focus on undocumented immigrants with criminal records and those who had come to the country more recently.

According to a 2014 Pew Research Center report, there are 11.1 million undocumented immigrants living in the United States — 850,000 of them live in Florida.

Unauthorized immigrants face the same fears as anyone else — they can be injured in a car accident or otherwise hurt due to someone else’s negligence. When that happens, they have the right to make claims for damages without having to talk about their immigration status. They may seek damages for medical expenses, pain and suffering, and disability, among other claims.

However, an illegal alien seeking compensation for lost future earnings will have to discuss his or her immigration status in front of a jury. This standard was established by a 2008 Florida appeals court case. Additionally, a federal court in Orlando ruled in 2003 that illegal immigrants cannot file claims for lost wages in wrongful death lawsuits.

Note that illegal immigrants injured on the job are also entitled to workers’ compensation benefits. But a recent investigation conducted by NPR and ProPublica found that a state law makes it easy for employers to avoid paying lost wages and medical expenses to undocumented workers.

A state senator wants the legislature to review the 2003 law that allows these workers to be arrested and potentially deported instead of paid workers’ compensation benefits. Republican Senator Anitere Flores, the second-highest ranking member of the Florida Senate, told the Pacific Standard that “[l]egitimate injuries shouldn’t be denied just because the person was an undocumented immigrant.”

Contact an Orlando personal injury attorney at The Pendas Law Firm today for a free consultation if you are an undocumented alien who has been injured by someone else’s negligence. You face special obstacles that other injured persons do not have to deal with. Our experienced attorneys will explain your legal rights and help you recover compensation for your injuries.