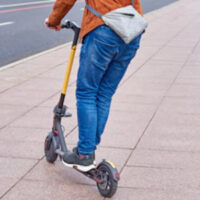 The South Florida Sun Sentinel recently reported that a Fort Lauderdale woman is still in a coma after an electric scooter crash that occurred several weeks ago. The woman was apparently hit by a vehicle as she rode the for-rent scooter onto a downtown Fort Lauderdale street. The initial police investigation uncovered that the 27-year-old ran a stop sign and was struck by an oncoming Toyota Corolla, sending her flying about 25 feet. Sadly, the young woman remains in a vegetative state in the hospital with a fractured skull, a severe brain injury and multiple broken ribs. Doctors also had to remove a portion of her skull.

Her family has publicly asserted that electronic scooters are dangerous — and that dockless scooter customers are being given bad information about where they’re supposed to ride the scooters. A legal representative of the young woman has stated that the Lime scooter app, as well as writing on the scooter itself, tells people using it not to ride on sidewalks but the law itself stipulates that scooters are only allowed on sidewalks in the city.

The popularity of scooters is not in doubt. Officials have asserted that about 4,000 people a week are riding downtown and at the beach on scooters provided by four companies: Gotcha, Bird, Lime and Bolt – and scooters haven’t even been in the city for a year yet. However, due to tragedies like the one outlined above and the fact that electric scooters remain a novel area of the law, it is unclear how legal responsibility will play out going forward.

How Dangerous Can Electric Scooters Be?

In just a two year period, electric scooter startups like Bird and Lime have spread across the US and internationally. However, the sudden and rapid expansion of scooters on city streets has prompted fears that they’re spreading faster than regulations, and most importantly safety measures, can keep up with. Unfortunately, statistics seem to only substantiate these claims. An investigation by Consumer Reports revealed that there have been at least 1,545 accidents in the US involving electric scooters over the past year. And because this data is incomplete, the actual figure could be much higher.

If you or someone you know has been injured in a scooter accident, the Fort Lauderdale personal injury attorneys at The Pendas Law Firm can help. Because this means of transportation has recently risen in popularity, it can be more difficult to understand where to turn as this is a novel legal matter. If someone else was at fault, you can hold them accountable and ensure that you are compensated for the pain and suffering you have experienced. With this kind of claim, it is especially important to have the help of an experienced legal team that doesn’t shy away from complex or new areas of law. Contact the experienced Jacksonville personal injury attorneys of The Pendas Law Firm today and we will help you recover the compensation you are entitled to.