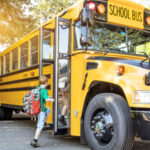 If you are like most parents, you have wondered once or twice about whether school buses are really safe without seatbelts. Though school buses are driven by only the most qualified drivers, and though school bus design has been tested over and over again to ensure that the build provides the utmost safety to… Read More »

Should You Resolve Your Personal Injury Case Out of Court?

Accidents happen, and when they do, they have the potential to be devastating. Serious injuries can result in high medical bills, lost wages, and ongoing pain and suffering. To compensate for these damages, Florida law allows for individuals to file a claim against the liable individual. When a claim is filed, it can either… Read More »

With all the advancements in medical technology today, labor and delivery is a typically a very smooth process without many, if any, complications. Because of this, most women expect to go into labor and delivery, have their baby, and be home within two to three days max. And while a majority of deliveries do… Read More »

Proving Damages in a Personal Injury Suit Against the Government

How To Put a Value On Your Injury

In order to file a personal injury claim against any individual or entity, you must first determine how much money you seek to gain for your damages. Many individuals struggle with this aspect of filing their claim, as they do not want to ask for too much in the event that the jury will… Read More »

Fort Lauderdale Woman Awarded Over $300,000 In Judgement Against City

Recently, a Fort Lauderdale woman seriously injured in a 2010 crash involving a police cruiser received a $306,000 verdict in her favor. The Broward County jury hearing the case determined the officer involved in the crash, Fort Lauderdale Police Officer Daniel Gowans, to be 90 percent at fault in the accident. The case began… Read More »