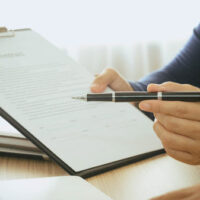 Q: What is a settlement agreement?

A: A settlement agreement is a legally binding contract that is entered into voluntarily. The parties negotiate the terms of the agreement, which usually requires the plaintiff to discontinue legal action in exchange for financial compensation. Payments are either made in a lump sum or in structured amounts over a period of time.

Q: Is there an advantage to signing a settlement agreement?

A: There are many advantages to settling a case instead of going to trial. For example, settling is usually quicker and less expensive than litigation. Settlement agreements can also remain confidential, unlike court records, which are public information. Settlements are also a guaranteed “win.” Even though you don’t get the satisfaction of prevailing at trial, signing a settlement guarantees you will receive compensation. It removes the uncertainty of trial.

Q: Are there any disadvantages to signing a settlement agreement?

A: Yes. For example, you might have received a higher monetary award from a judge or jury. You’ll also miss out on the satisfaction of winning at trial and holding the defendant publicly accountable for your injuries.

Q: How does the settlement process work?

A: One party initiates the settlement process by making a specific offer to the opposing party, who may accept, reject or modify the proposal. If the opposing party modifies the offer, then the first party has to accept those modifications in order for the agreement to take effect. There might be several rounds of negotiations before the parties reach an agreement.

Q: What happens to the original lawsuit?

A: It depends. The parties have several options, which include dismissing the lawsuit, leaving the lawsuit open until all settlement obligations are performed, and agreeing to an entry of judgment that reserves the court’s authority to enforce the agreement.

Q: How is a settlement agreement enforced?

A: A settlement agreement is a contract and is subject to the normal rules of contract interpretation. But enforcing a settlement agreement can be tricky if the court didn’t reserve jurisdiction (the official power to make legal decisions) over the case. An experienced attorney can walk you through your options and help ensure the terms of the agreement are fulfilled.

Contact a West Palm Beach personal injury attorney at The Pendas Law Firm today for a free consultation if you are injured because of a negligent act. We will guide you through the litigation process and determine if a settlement agreement is appropriate in your case. If so, we will negotiate a strong settlement on your behalf.