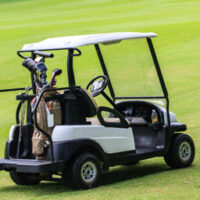 Golf carts are a popular mode of transportation on golf courses, but they are also commonly used on college campuses, in retirement communities and even on roadways. This can be dangerous, especially considering that golf carts lack the same safety features as larger vehicles. They were not designed to be driven on roads or at high speeds, which is why not all golf carts come equipped with seatbelts.

According to the federal Consumer Products Safety Commission, there are approximately 15,000 golf cart-related injuries in the U.S. every year. Common causes of injury and death include:

Florida law considers golf carts “dangerous instrumentalities,” which means that owners who negligently entrust their vehicle to another driver can be held liable for damages. Of course, the negligent driver can also be held liable. Injured parties have four years from the date of the accident to file a personal injury claim.

In July, a 36-year-old man crashed a golf cart near Buena Vista Boulevard and State Road 44 in Sumter County. A 51-year-old passenger, a Fort Myers woman who famously opened her 2015 wedding reception to hundreds of strangers, was injured in the accident. The man told police that she fell out of the cart and couldn’t stand up so he dragged her into some bushes and left the scene. He now faces criminal charges, including driving while under the influence and leaving the scene of an accident with serious bodily injuries.

In Lowndes County, Georgia, a Florida man driving an SUV struck a golf cart attempting to make a U-turn. An 11-year-old girl was driving the cart, along with a 12-year-old passenger. The SUV crashed into the cart when the girl slowed down to make the turn. Both vehicles traveled off the side of the road, and the cart overturned. All three individuals were injured in the accident.

In April, an 8-year-old boy was killed when he was struck and run over by a golf cart driven by an 11-year-old girl in Thomasville, Florida (there were three younger children also riding in the cart). The golf cart knocked him to the ground, where he hit his head on the asphalt. The cart then ran over him. The boy was initially in the hospital in critical condition but unfortunately did not survive his injuries.

Contact a Fort Myers personal injury attorney at The Pendas Law Firm today for a free consultation if you or a loved one have been injured in a golf cart accident. We will help you recover damages for your injuries.