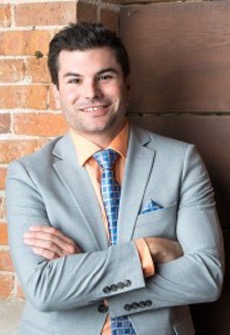 Mr. Gartland was born in Newtown, Connecticut, and moved to the Southwest Florida area when he was a child, and has called it home ever since. He attended Florida Gulf Coast University where he received a Bachelor of Science in Criminal Forensic Studies and Criminal Justice, graduating with honors. Mr. Gartland then attended the University of Cincinnati where he received his Master of Science in Criminal Justice with academic distinction. He earned his Juris Doctorate degree from the University Of Florida, Levin College Of Law located in Gainesville, Florida.

While in law school, Mr. Gartland was a member of and participated in trial team, served as president of the Law Student Transfer Organization, received the Wildcard Award for oral advocacy, obtained a certificate of concentration in Criminal Justice, and a pro-bono award for his philanthropic work volunteering while in law school, all the while taking numerous courses centered around litigation, negotiation, and advocacy. Mr. Gartland also worked as a certified legal intern (“CLI”) with the Law Offices of Kathleen A. Smith, Public Defender, for the Twentieth Judicial Circuit of Florida in Fort Myers to gain trial experience before graduating from law school. After graduation and passing the Florida Bar Exam. Mr. Gartland began his legal career as an associate attorney at Swope, Rodante P.A., in Tampa, where he represented and assisted individuals and families who had been injured or killed because of greed, carelessness, and negligence. While at Swope, Rodante P.A., he assisted in the litigation and trial of a personal injury case that resulted in a top 25 trial verdict for the State of Florida in 2019, with a jury award of over $3.83 million dollars. Mr. Gartland continued to realize success as a litigation attorney at Gunter Firm in Fort Myers were he litigated, negotiated, and settled numerous employment, breach of contract, and personal injury cases. In April of 2021, Mr. Gartland joined the Pendas Law Firm believing in the firm’s commitment to law, zealous advocacy, and the shared mission to achieve “justice for all” one case at a time. It is his lifelong pursuit to right the wrongs of our world by fighting for those who have been injured, damaged, and broken by greed, carelessness, and negligence.

In his free time, Mr. Gartland enjoys giving back to the Southwest Florida community by volunteering with various philanthropic organizations through the Lee County Bar Association, playing sports, traveling, camping, writing music, going to the beautiful beaches of Southwest Florida, and attending church.